The new Perth and Kinross One Stop Shop for adults with Autism Spectrum Conditions was officially launched today. The service based at Number 3, King Street, Perth, is open to people aged 16 and over living in Perth and Kinross with an autism spectrum condition.

Number 3 opened at the beginning of May and has already welcomed 18 people with autism through its doors. Number 3 offers activities and social groups as well as one to one support. 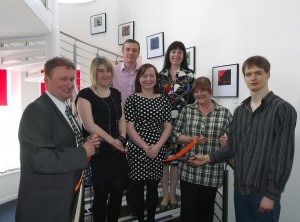 Jill Murdoch, manager of Number 3, explains what this new service will offer

“We want this service to be a place where people with autism spectrum conditions can come and enjoy themselves, relax, meet people and socialise in a welcoming environment. We are currently offering  14 drop ins per month but aim to increase this as more people find out about us and attend the service. We hope that the people using Number 3 will take the lead in shaping and developing what it offers to people with autism across Perth and Kinross.”

The One Stop Shop model is based on a service originally developed in Edinburgh by leading autism support charity Autism Initiatives. Richard Ibbotson, National Director for Autism Initiatives Scotland explains its success.

“The One Stop Shop in Edinburgh started with a small team and offered a drop in once a week as well as a few activities. 8 years on the same service has supported over 800 adults with autism from across Edinburgh and the Lothians, is open 6 days a week and runs over 50 different activities and social groups per month.”

“This has all been thanks to the input and ideas of the people who directly use the service. We look forward to the Perth and Kinross One Stop Shop developing its services in the same way, by supporting people with autism in the way that they want to be supported.”

Autism affects 1 in 100 people in the UK. It is a lifelong condition, which affects how a person communicates, interacts socially, and can present difficulties or differences for the person in their thinking, imagination and sensitivity of their senses.

Autism is a spectrum condition; individuals with autism will share similar difficulties; however the way in which autism will impact on the individual is unique, with no two people with the condition being exactly the same.

Ian Barrett, aged 21yrs, lives in Blairgowrie. He was diagnosed with an autism spectrum condition when he was 7 years old.

“I’m delighted the One Stop Shop has arrived in Perth as it is a centre where people can go to socialise and take part in activities and also to get help and advice from people who know about autism. I am hoping to get involved in more activities and am glad that the Spectrum club is continuing.”

Ian’s mum Ann continues; “Ian is enjoying it at the One Stop Shop so I’m very pleased. I, myself have already received advice on welfare queries at Number 3 which has been very useful.”

Thanks to funding and support from the Scottish Autism Strategy the One Stop Shop model is being delivered across the country and Autism Initiatives, working in partnership with National Autistic Society and Scottish Autism are delighted to be officially launching the Perth and Kinross One Stop Shop today.